Clinical studies show that the laser kills toenail fungus and promotes clear nail growth with a single treatment in better than 80% of cases.

LASER FOR TREATMENT FOR NAIL FUNGUS 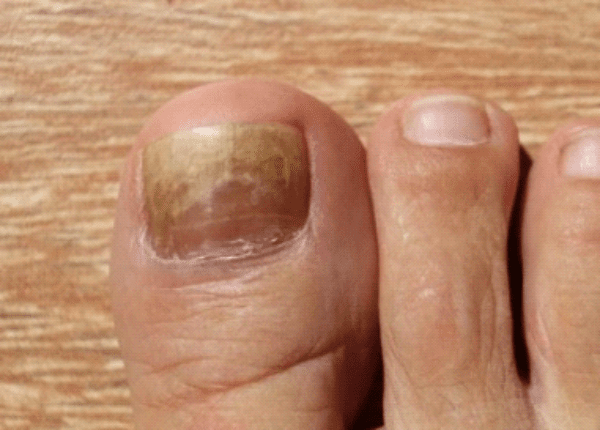 Infections caused by fungi can affect any region of the body. Fungi, like bacteria, are generally found in and on the human body. However, if a fungus becomes too large, it might cause an illness.

Tinea unguium, or onychomycosis, is a fungal infection that affects the fingernails or toenails. Because fungal infections usually take time to manifest, any sudden changes in the appearance or feel of your nail may be difficult to detect at first.

Why does it develop?

The overgrowth of fungi in, under, or on the nail causes a fungal nail infection. Fungi thrive in warm, damp conditions, therefore they may naturally overpopulate in this type of setting. Nail infections are caused by the same fungi that cause jock itch, athlete’s foot, and ringworm.

Nail infections can be caused by fungi that are already present in or on your body. You may have contracted a fungal infection if you came into contact with someone who has one. Toenail fungus is more frequent than fingernail fungus, owing to the fact that your toes are usually confined to shoes, where they are in a warm, wet environment.

If you receive a manicure or pedicure in a nail salon, inquire about how and how often the staff disinfects their tools.If tools like emery boards and nail clippers aren’t cleaned, they can spread fungal illnesses from one person to the next

Who’s at risk for Nail Fungus?

Fungal nail infections can be caused by a variety of factors. Each cause has its treatment. Although many of the causes of a fungal nail infection are avoidable, some risk factors such as diabetes and age increase the chances of getting one.

Nail infections are more common in males than in women, and they affect adults more than children. You’re more likely to have these fungal infections if you have family members who get them frequently.

Because of their weak circulation, older persons are more susceptible to fungal nail infections.As we get older, our nails slow down and thicken

What are common kinds of nail fungus?

The most frequent type of fungal nail infection is a distal subungual infection, which can affect both fingernails and toenails.When infected, the nail’s outer edge becomes ragged, with white and/or yellow streaks running across it.The infection spreads to the nail bed and underneath

Toenails are commonly affected by white superficial infections. A specific type of fungus infects the upper layers of the nail, resulting in distinct white patches.

These white patches eventually cover the entire nail, making it rough, fragile, and prone to cracking. Pitted and flaky spots on the nail are possible.

Proximal subungual infections affect both fingernails and toenails and are infrequent. As the infection grows higher, yellow patches form at the base of the nail.

People with weakened immune systems are more likely to contract this virus. It can also be caused by a slight nail injury.

Toenail fungus infection is a difficult-to-treat condition that affects the appearance and texture of the nail and can be treated using laser therapy. There are numerous types of laser treatments available, including light and carbon dioxide laser treatments (CO2).

Fungal nail infections frequently require multiple laser therapy sessions to completely eradicate. Laser therapy can take anything from six to 18 months of frequent treatments to be effective. These therapies are regarded as safe, while they may induce adverse effects such as pain and/or bleeding in the surrounding area.

Is laser effective on nail fungus?

Looking at the clinical trial data/facts, laser nail fungus treatment is effective.
A 2016 study by the FDA found that patients who received laser foot treatment displayed clear nails at three months and six months after treatment.
In 2018, the journal Lasers in Medical Science published a study about the efficacy of laser treatment for fungus removal. These researchers reported a success rate of 83.7% among the patient population, who had infections that affected at least two-thirds of the nail.
A 2019 study published in the journal American Family Physician by the American Association of Family Physicians study concluded that laser treatment is more effective for fungus removal than both over the counter and prescription topical and oral antifungal medications

What is the procedure like for laser nail fungus?

The lasers used for fungus removal attack the organisms under the nail without damaging the skin and tissue.Unlike topical therapies, the light can penetrate through the toenail to reach the fungus.The treatment is almost always painless, though you may feel warmth or tingling on the nail bed during the treatment.

How many laser treatments are needed for toenail fungus?

Most patients only need one laser treatment to get rid of toenail fungus. In some more severe cases, it may take two treatments to fully extinguish toenail fungus. 90% of patients report that their fungus is gone after one treatment. It can take six months to a year for your nail to return to its former appearance.