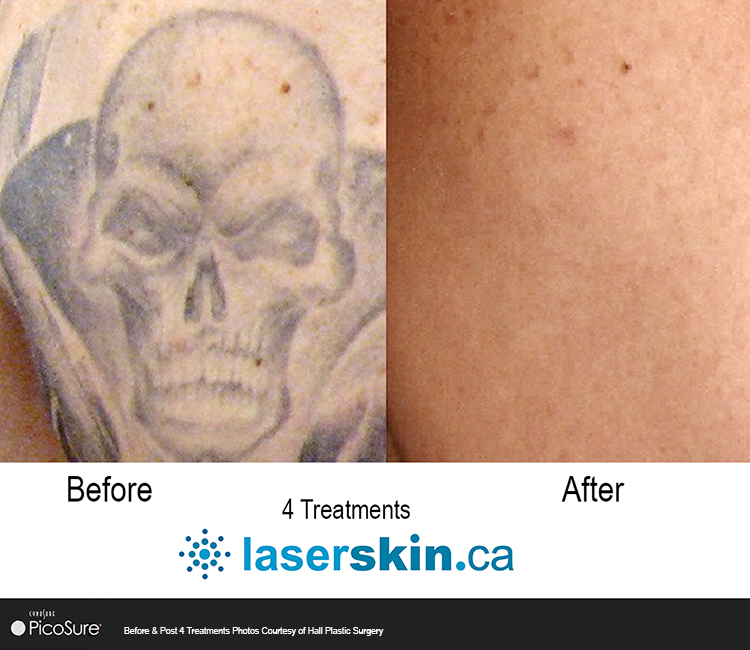 Posted in Uncategorized By simonwPosted on December 12, 2022December 25, 2022Tagged laser tattoo removal before and after

Laser tattoo removal before and after

The PicoSure® technology proves that tattoo removal has improved significantly over the years. In addition, research and various clinical studies have demonstrated that the picosecond 755-nm alexandrite laser is a safe and very effective device for tattoo removal.

PicoSure’s technology creates a photothermal impact that causes significant heat damage to the skin but also protects the chromophore, allowing for better clearance and fewer treatments.

Laser tattoo removal before and after

The advantages of laser tattoo removal

Since the late 1970s, lasers have been used to erase tattoos. For example, tattoo removal using an argon laser was attempted on 28 people in 1979 with minimal results.

Novel clinical research exploring the effects of Q-switched ruby laser light on blue/black tattoos was conducted in Scotland in the 1980s. Further research into different tattoo colours was conducted with varying degrees of success.

Thousands of tattoo pigment particles stay in the skin’s dermis after the ink is put into it. However, the photomechanical impact of laser treatment causes these particles to heat up and fracture into smaller bits. In most instances, macrophages transport ink particles to lymph nodes around the tattoo site. Macrophages are specialist immune cells that surround foreign particles and remove them from the body.

The energy absorbed by the ink particles during the photomechanical effect is measured in nanoseconds. Four factors determine the degradation of tattoo pigments by laser tattoo removal:

How Many PicoSure Laser Treatments Are Needed to Remove a Tattoo?

The Kirby-Desai scale is often used to determine the likelihood of success and the number of sessions required for laser tattoo removal. Unfortunately, patients are usually given an inaccurate appraisal of the number of therapies available, and they typically participate in the process without fully understanding the likelihood of success. Six characteristics are assigned numerical values in the Kirby-Desai scale: skin type, location, colour, the quantity of ink, scarring or tissue alteration, and layering.

The average number of laser tattoo removal sessions needed was 8, ranging from 3 to 20 treatments. Treatments must be scheduled six weeks apart.

Patients with Fitzpatrick skin types (darker skin) are unsuitable for laser tattoo removal. In addition, because they use the laser on lower settings to minimize undesired side effects like hypopigmentation, they often need longer wait periods between treatments.

Set up a free consultation today

Are you looking for tattoo removal in Toronto? Fill out our online form, submit a few images of your tattoo, and we’ll contact you with the pricing and any questions you may have. Contact our tattoo removal Toronto or Richmond Hill Clinic. CLICK HERE

Laser Tattoo Removal Before and After